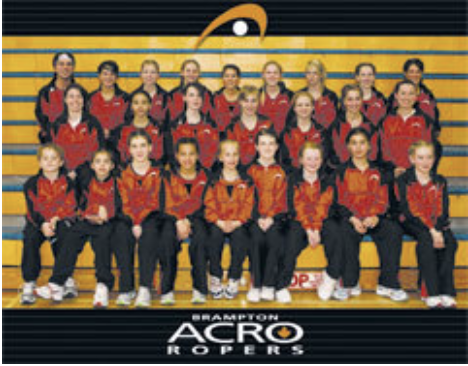 The Brampton Guardian  Wednesday May 14 2008

BRAMPTON – The Brampton Acro Ropers (BAR) has qualified 23 of its 25 athletes for the National Rope Skipping Championships in Halifax from tomorrow until Saturday.

The club had plenty of success at the recent provincial championship in Stoney Creek. Club gold medals were in the junior 12 to 14 division to the BARbarians (Jenna Watson, Krystal Veldhoen, Emily MacRae, Sheyenne Chappell and Ellory Bruce).
Gold also went in the intermediate (aged 15 to 17) to Raising the BAR (a team made up of Erika Wolter, Jaclyn Santamaria, Samantha Santamaria, Brittany Gillies and Shelby Toews).
Also collecting gold for Brampton was the senior mixed (aged 18 to 29) team Drop the BAR (Brittany Yard, Kathleen O’Callaghan, Matt Delorey and Amy Chiappetta).

The Acro Ropers earned a fourth in intermediate to the team of Kylie Matheson, Megan Jarchow, Stephanie Hoey and Olivia Bruce). An additional fifth was in the novice 3 (10, 11) Leaping Lollipops team of Sydney Van Engelen, Erin Postma, Zoe Lefebvre and Alana Coughlin.
At the Masters provincials the club had four gold medal-winning performances. In the novice 2 division Coughlin, 8 brought home the gold.

Fifth place in novice 2 was by Van Engelen, 8, who also took third in the three-minute endurance.
Sixth place in intermediate was by Erika Wolter, 16, the 2007 overall national team champion.
All of those athletes from BAR have qualified for the nationals.
The Brampton team performed at the Fletcher’s Meadow Spring Fling community event last Saturday (May 10) from 10 a.m. to 3 p.m.

BAR is also anticipating sending a number of athletes and teams to the World Competition in South Africa in July.